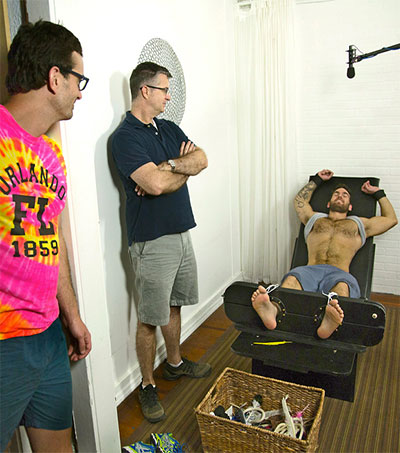 “About half an hour into the queasily entertaining documentary Tickled, we’re introduced to a Florida man named Richard Ivey, who runs a lucrative video website catering to those who share his highly specific fetish,” Justin Chang describes in a review of David Farrier and Dylan Reeve’s film for the Los Angeles Times.

“Describing the art of tickling as a milder form of sexual bondage, with feathers and toothbrushes in lieu of whips and chains, Ivey proceeds to give a handy demonstration on camera. He runs his fingertips all over the chest, armpits and feet of a handsome, heavily tattooed young man – who, being tied down, can respond only with bodily contortions and uncontrollable giggles, punctuated by cries of ‘Stop!’ and ‘I hate this!’

“You’ll be pleased to learn (or not) that this spectacle of tee-hee torture is not the true subject of Tickled. Directed by the New Zealand-based filmmakers Farrier and Reeve, the movie draws you in with its eyebrow-raising look at an erotic subculture, then quickly escalates into a harrowing tale of alleged identity theft, online intimidation and American privilege gone dangerously awry. It’s a measure of the film’s subversiveness that by the time Ivey appears, he seems a model of sanity and stability: His proclivities may be pretty out there, but he discusses them happily and without shame, and he has placed them in service of an honest living.

“The project was set in motion when Farrier, a pop-culture reporter and connoisseur of everyday human weirdness, received a tip about a sport known as ‘competitive endurance tickling’.

“Smoothly shot and edited despite its handheld paranoid-thriller style, Tickled was one of the more talked-about premieres at this January’s Sundance Film Festival.

“By the end you may feel moderately relieved and more than a little creeped out, but you may also wish that this undeniably compelling documentary had done more than lightly brush the surface.”