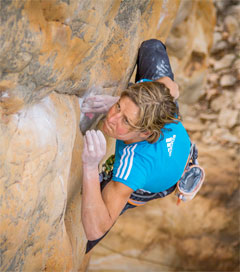 Smith-Gobat to Make Trio of US Climbing Record Attempts

In free climbing, rope is used only to prevent falling and not to ascend. Free climb ascents are rarely attempted by a one-woman team.

Christchurch-based Smith-Gobat is one of the world’s best female rock climbers. She currently holds the female speed record on a buttress called “Nose” on the 2307m El Capitan rock formation.

Smith-Gobat says she is climbing in part to inspire the female athletes of that community.

“In rock climbing women are close to men, if you look solely at pure difficulty, but rarely do they compete on the same level as the guys,” Smith-Gobat says.

“I want to show that we women are just as capable, on any terrain.”

Among her many climbing achievements, Smith-Gobat holds several female “first climbs” of difficult faces in New Zealand, the US and France. In 2012 she became the first New Zealander to free climb the iconic El Capitan’s 1000m Salathe face. A week later she climbed it again in a single 14-hour push.

Smith-Gobat will give a presentation at the tenth annual Yosemite Facelift on 29 September.