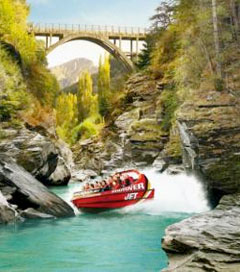 “Shortly after the invention of the jet unit by New Zealander Bill Hamilton, the Melhop brothers started the world’s first commercial jet boating on the Shotover River in 1960,” Richard Irwin writes for the Pasadena Star-News. “The famous jet boat trip really is an amazing blend of technology, adrenaline and skill. The bright red boats roar through the narrow walls of Shotover Canyon in inches of water. When Shotover Jet began operating in 1970, it was one of Queenstown’s first adventure activities and it has gone on to become one of New Zealand’s biggest visitor attractions. Since then, the company has developed bigger, safer boats. In 2002, Shotover Jet built a new fleet of twin-engine jet boats to replace its single engine boats. Built right in Queenstown, the jet boats have been designed specifically to handle the Shotover River Canyons. The Big Red boats are powered by two Buick V6 supercharged engines producing 520 horsepower. Propulsion, steering and control is provided through two Hamilton 212 Jet Units thrusting 200 gallons of water per second. The outgoing drivers seem to relish their jobs, pushing the jet boats to the limits. Sitting beside the driver in the front seat, it seemed like the driver was aiming for the towering canyon walls. At the very last second, he would flick his wrist and the boat would skim along the sheer rock face. Other times, he would barely clear a big boulder. And the crystal clear water allowed passengers to see how terribly shallow the river was in places. But with no propellers and no keel, these beasts only need centimeters of water to operate. The jet boats can even brake and reverse using deflectors similar to a jet aircraft and can turn 360 degrees in one boat length. In the blink of the eye, we would be facing the other direction.”