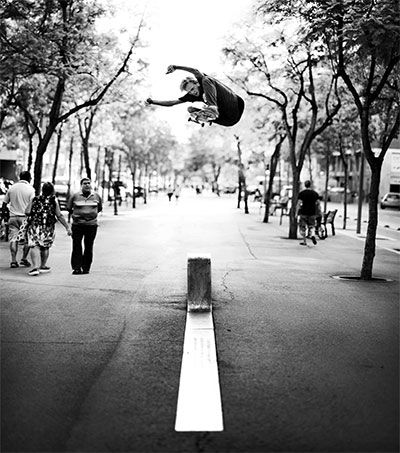 Skateboard photographer Jake Darwen, 25, who grew up on Auckland’s North Shore and is now based in Los Angeles, shoots for the likes of New Balance and Element, often travelling to offbeat destinations in the United States and beyond that no skateboarder has been professionally photographed at before.

“We might see a particular location on a YouTube documentary about a ghost city in China, or we might simply look on the map and pick out a city that people don’t tend to go to, hoping there is going to be something there for us to skateboard when we land,” Darwen told Stuff for a travel piece. “It’s a big risk going somewhere that no one has skated previously but that’s the best thing about it – finding gems and discovering the city in the process.”

He is drawn to abandoned cities and towns, he says, because there are few, if any people, to get in his way or tell him off.

“The open space allows you to shoot photos with a wide perspective without being flooded by pedestrians and cars. Everything is so spread out and so clean which is an amazing thing to have as a photographer because you can move around to multiple angles without anything in your way. Also, there are no security guards or any police kicking you out of the spots. You can seriously skate anything and anywhere you want.”

A skilled skateboarder as a child, Darwen set his sights on going pro before injuring his knee and being told he wouldn’t be able to skate for at least six months. He turned to photography as a way to stay in the game, saved up for an entry-level camera and quickly became hooked.

After five years of taking photos for commercials and magazines, he made the permanent move to LA, which he sees as the skateboarding centre of the universe.

Darwen has now set his sights on becoming an official photographer at the Olympics in Tokyo in 2020, the first time skateboarders will compete at the Games.

He won the 2017 Olympus Pro Photographer Showdown in Whistler, Canada.