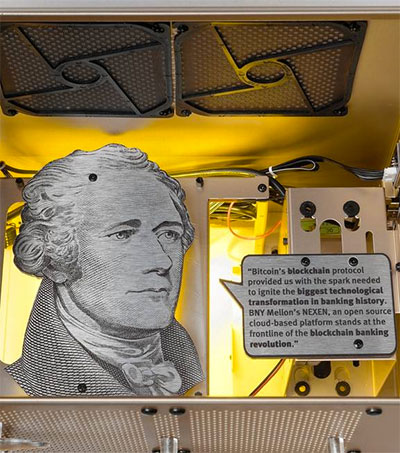 Two shows by New Zealand artist Simon Denny, in New York and Berlin, look at competing views on how the little-understood technology underpinning the digital currency bitcoin should develop – and helps translate them for viewers, the Wall Street Journal reports.

Denny uses everyday objects like Pokémon, postage stamps and the strategy board game Risk to illuminate how technology shapes the way we live and work. In his latest exhibition, the Berlin-based New Zealand artist explores blockchain, the little-understood technology underpinning the digital currency bitcoin.

Opening this week at New York’s Petzel Gallery, “Blockchain Future States” looks at competing views about how the technology should evolve. Large cutout images of the leaders of three leading blockchain companies – Digital Asset Holdings LLC, 21 Inc. and Ethereum – stand near globe-like structures meant to highlight how new currency systems could challenge traditional forms of statehood. A Risk board for each firm lays out the company’s strategy to create a new world order. A similar installation, “Blockchain Visionaries,” is at the Berlin Biennale until 18 September.

Seeing the technology through the lens of everyday objects like a Risk board creates a cultural entryway into a highly technical subject (a decentralised transaction ledger) that might bore the average viewer.

“Pretty much everyone who walks into that room will have some relationship to Risk,” the 33-year-old artist says.

While the Berlin show doesn’t include the Risk boards or digital monsters, it benefits greatly from its location: a former East German State Council building that’s now part of a management school. Denny says the space highlights a physical meeting point of different systems of governance, which encourages new ways of looking at markets and sovereignty.

The artist says his goal isn’t to come to a solid conclusion about which blockchain future is better, but to tease out the possible opportunities and obstacles of each. “When people come across new technologies like this, they’re just not sure,” he says. “I’m coming in as a fan and optimist, but not as a blind publicist.”