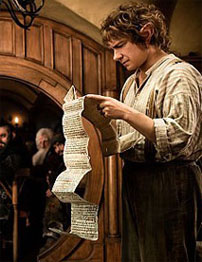 A 10-minute sequence from Peter Jackson’s forthcoming two-part Lord of the Rings prequel The Hobbit has been shown to conference goers at the annual CinemaCon in Las Vegas. The conference featured a presentation from Jackson of footage shot at the higher 48 frames-per-second format, which the film-maker has been championing as the future of cinema. Jackson said higher frame rates could make cinema “more attractive,” especially in 3D, as they were “more gentle on the eyes”. He said 2D at 48fps also looked “fantastic.” Variety reports some audience members said the actors appeared overlit and sharp in a way many compared to modern sports broadcasts or daytime television. One LA film buyer told the Times: “I’m not going to judge it based on 10 minutes.” Part one of Jackson’s project, The Hobbit: An Unexpected Journey, hits cinemas in December, giving six months to perfect the user experience.

Tags: CinemaCon  Guardian (The)  Hobbit (The)  Lord of the Rings (The)  Peter Jackson  Variety Magazine