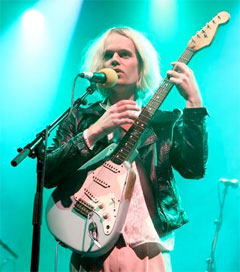 Shepherd’s Bush Gig a Trip down the Rabbit Hole

Eccentric Connan Mockasin may be, but it’s his wayward musicianship that has won over famous fans like Radiohead, Beck and rapper Tyler, according to the London Evening Standard, which reviews Mockasin’s London show at O2 Shepherd’s Bush Empire.

“It was a trip down the rabbit hole with oddball, psychedelic songwriter Mockasin for the final night of his Caramel Tour. With his shaggy blond bob and frontman magnetism, the New Zealander, now based in Manchester, resembled a benign cult leader,” Andre Paine writes.

“Mockasin opened with the surreal, collapsible funk of It’s Your Body from last year’s Caramel album, which he wrote and recorded over a month in a Tokyo hotel room. His guitar shimmered and spluttered and his wailing vocal sounded like a particularly woozy Prince.

“Things got a little stranger for the encore, when a kimono-clad Japanese woman appeared from under a duvet cooing Mockasin’s name, followed by the yawning singer himself emerging with a manipulated vocal that resembled the late Walrus of Love, Barry White.”

Photo by Burak Cingi/Redferns via Getty.