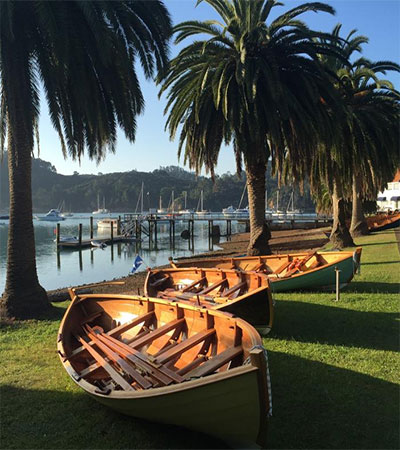 “A fleet of St Ayles skiffs travelled to Motuora Island nature reserve to participate in the most ambitious coastal rowing event to date: a 15-day rowing and sailing expedition exploring the islands, peninsulas and rivers of the Hauraki Gulf,” the Guardian writes for a photo essay of the journey.

“After humble beginnings with local community projects in Fife, Scotland, only six years ago, the sport of coastal rowing has spread quickly.” Guardian photojournalist Murdo MacLeod travelled to the Hauraki Gulf to take part.

“Scottish coastal rowing is a fast-growing community-centred rowing renaissance. With women making up more than half the participants, it has grown enormously in the last five years to number more than 2000 rowers from nine clubs in Scotland to 45 clubs. Each community club builds its own traditional styled St Ayles skiff in a clinker fashion albeit from a pre-cut standardised marine plywood kit.