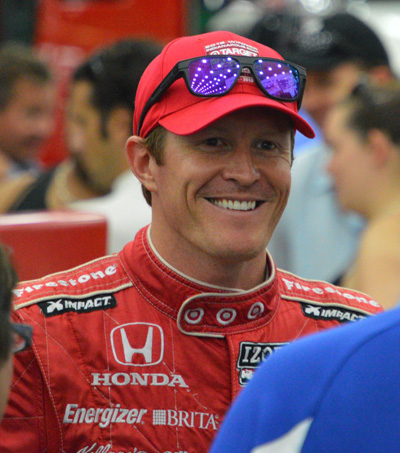 Scott Dixon has won Sunday’s race at Sonoma Raceway to clinch the 2015 Verizon IndyCar Series championship. He was awarded the title because he had three victories this season as opposed to Montoya’s two, whom he was tied with in the final standings with 556 points.

“I just can’t thank my teammates enough for all their help this weekend. First off, thoughts and prayers to Justin Wilson’s family… I don’t know what to say. This season we had some good races”, said the New Zealand race driver.

“I still can’t believe it. It was such a longshot to get this here. Just fantastic to get this championship.”

Dixon came into Sunday’s race third in the points, 47 behind Montoya, who had led the series points standings all season. “He seemed to be cruising to a title when he ran into the back of Will Power”, which is why Montoya had to make an extra pit stop to replace his wing.

It’s the fourth career series title for Dixon after winning championships in 2003, 2008 and 2013. He hasn’t finished worse than third in the points since 2007.

“The championship drama came on an otherwise somber weekend for the IndyCar Series, one week after an accident at Pocono that claimed the life of Justin Wilson.”