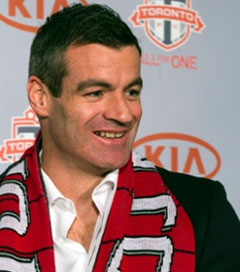 Former All Whites skipper Ryan Nelsen, has his first-ever coaching job, at Toronto FC. He faces a huge task trying to turn the club around, writes Sonja Cori Missio in The Guardian. Nelsen was picked by Kevin Payne, Toronto’s new president. Toronto is used to new coaches. Nelsen is the sides eighth since 2007. Payne’s choice was a surprise. Fans, and the local media, were amazed that Payne choose someone who has never coached. Nelsen has worked for Payne before, at DC United in the early 2000s. ‘Nelsen’s appointment is about Payne’s attempt to build his own club… this is not just another coaching appointment; it is a complete restructuring of the club’s system, an experiment that has not been tried before. Payne stands to benefit. He can build his own team…with little to no expectation… Any success is good. If he fails, well, Toronto is used to it,’ says Missio. In 2012, Toronto finished dead last in plays in the US –Canadian Major Soccer League (MSL).  Attendances have dwindled and player injuries and transfers have taken their toll. Toronto has lost their first MSL game with Nelsen in charge. Despite that, let’s hope New Zealand Football’s own ‘Captain Fantastic’ brings better days for Toronto’s long-suffering fans and players.