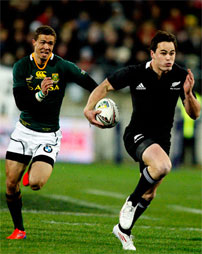 “New Zealand produced a dazzling display to run South Africa ragged in an emphatic Tri Nations victory at Wellington’s Westpac Stadium,” reported England’s Daily Mail. The All Blacks crushed the Spring Boks 4-7, with “[Dan] Carter regaining the world Test points scoring record despite struggling in tricky kicking conditions. In his first kicking act of the game in the third minute, Carter passed the world record of 1195 points held by England’s Jonny Wilkinson by landing a penalty goal.” The All Blacks next play the Wallabies at Eden Park on 6 August.