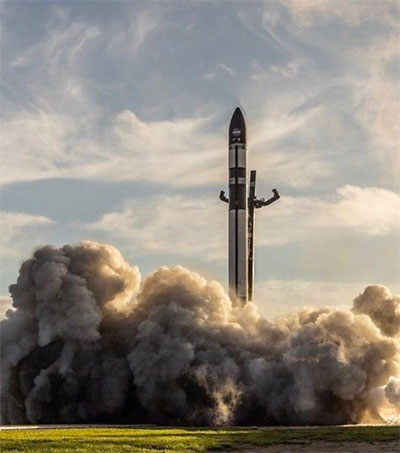 Peter Beck is a space entrepreneur with a rocket and launch pad in New Zealand that has permission for flights “every 72 hours for the next 30 years”. Beck recently spoke at the TED conference in Vancouver, where space has been a hot topic.

TED attracts tech billionaires who could afford to become space tourists, but Beck has his eyes on another prize.

“We have a fundamental policy that we will not fly meat,” he told the BBC. Instead his firm is concentrating on delivering small satellites from both the commercial and government sectors into orbit.

The Space Foundation has forecast that the international space industry will be worth $720bn by 2030, with much of the growth coming from launching satellites.

“Satellites used to be the size of school buses, but now they have shrunk to the size of microwaves and that creates a need for small rockets to launch them,” Beck said.

It costs around $7m to launch Rocket Lab’s Electron rocket from its base in New Zealand.

So far, it has completed five missions to deliver different payloads to specific orbits. Its most recent was for the Pentagon’s Defense Advanced Research Projects Agency (Darpa).

“Space is enormously hard, there are lots of considerations like infrastructure and regulation so there are huge barriers to entering this market,” Beck said.

Despite that, he believes we are heralding a new age of space entrepreneurialism.

“I used to wish when I was growing up that I was born in the Apollo era because I thought that was the golden time to be in space but, quite honestly, it is now,” he told the BBC.

Rocket Lab is currently building a second launch pad in Virginia in the US (due to be completed in September) and is even considering a third one in Scotland.