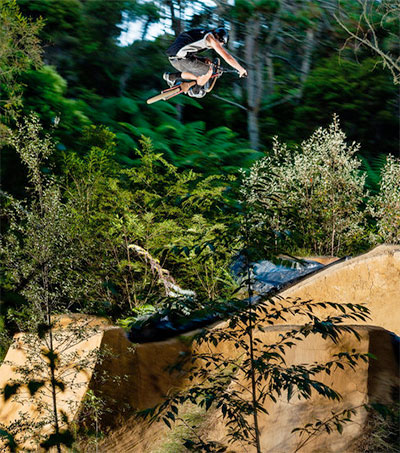 For a trails rider, an appealing aspect of New Zealand is the PMP trails, located not far from the bustling metropolis of Auckland. This sculpted greatness is a dramatic clay theme park for two wheels, according to Red Bull’s Rob Dolecki.

The name PMP trails comes from the three men who started the trails in 2004, Pete, Mike and Pom (Mark).

Their dedication and pride shines through in the aesthetics of each jump’s construction, where the trails are built entirely by hand, without the assistance of any machinery.

For rider George Bolter, local Auckland resident and part of the tight-knit crew of friends who build and maintain PMP, “what draws us out here to put in so many hours is really just the reward of riding and hanging out with your friends. What you put in you get out. It’s just the best feeling when you get to ride the spot you put so much work into.”

Word has been spreading across the international trails community, and more and more riders from all over the globe have been embarking on a journey to Middle Earth to experience PMP.

PMP trails are well on their way to becoming as legendary as the New Zealand landscape itself.