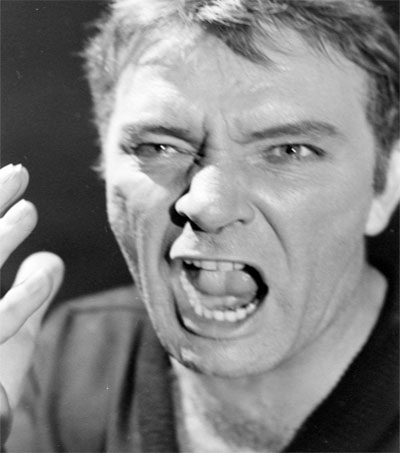 In 1993, New Zealand-born LIFE photojournalist George Silk was asked by American photographer John Loengard if in his long career, Silk had been “willing to pose pictures.”

Silk’s reply is worth setting down here in full:

“Oh, sure, if it’s called for, yes. I did some great pictures of Richard Burton (pictured) doing Hamlet. [Praising his muscular performance as the Dane, LIFE wrote that, at one point, Burton storms to his mother Gertrude’s chamber “like an avenging angel.”] I’d only done one theatre photo call in my life before. They are intimidating. You’ve got all these tired people after a performance. Burton said, “What do you want?”

“What do you mean? You’re taking stills, aren’t you?” he said.

And he said, “You goddamn New Zealanders. We can’t beat you at rugby, and we can’t beat you on the photo call.” Then he says, “Let’s do what the Kiwi wants.” By then, you know, we’re like that, and I just went all over him as he did his fencing and stuff. The pictures were great, and he got the word back to me that they were the best pictures he had ever had taken of him. LIFE used one on the cover and five or six pages of him inside the magazine. Why am I telling you this? Because you asked if I posed. There’s the answer.”

Silk began working for LIFE magazine in 1943. He photographed throughout World War II, covering the war on the Italian front, and the Allied invasions of France and the Pacific. He also shot the first pictures of Nagasaki after the atomic bomb was dropped.

Silk was named magazine photographer of the year four times by the National Press Photographers Association.