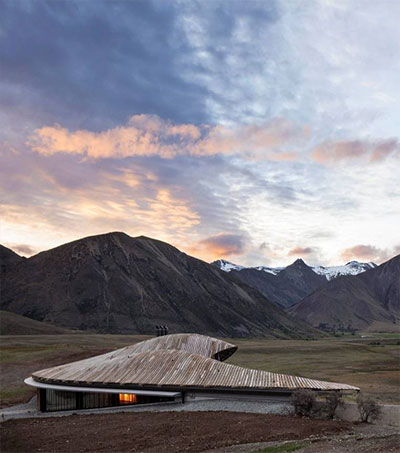 Spectacular Lindis Lodge in the Southern Alps, designed by Wellington-based Architecture Workshop, has taken out the top hotel award at the World Architecture Festival, Colleen Hawkes reports for Stuff.

The lodge won the Hotel and Leisure – Completed Buildings category at the festival, with judges describing the project as “poetic, inspiring and sensitively considered, with sustainability at its best, from the water treatment, heating and cooling to the natural ventilation and insulation”, Hawkes reports.

Lindis Lodge is a five-bedroom luxury lodge overlooking the Ahuriri River near Omarama. The site is exposed to an extreme climate ranging from plus 35 degrees in summer to minus 16 degrees in winter with severe winds as a regular occurrence.

Architect Chris Kelly of Architecture Workshop, who was in Amsterdam for the awards, says “the fabulous New Zealand landscape helped us”.

“The lodge effectively forms a new ground; a constructed topography that adds a further fold within the continuity of the existing glacial moraine. The building wraps its guest in a protective cloak, and we hope heightens their capacity to appreciate in wonder the special landscape of the Ahuriri,” Kelly says.

Kelly says the lodge was up against “16 of the best new hotels from around the globe”. “Every project team had 10 minutes to present, followed by eight minutes of jury questions.”

Architecture Workshop says the remote location is served by a fragile single phase power supply. A backup generator is provided in a buried energy shed.

Potable water is filtered from the on-site bore and rainwater harvesting system, and black and grey water systems discharge to a biodegradable on-site sewage treatment plant.