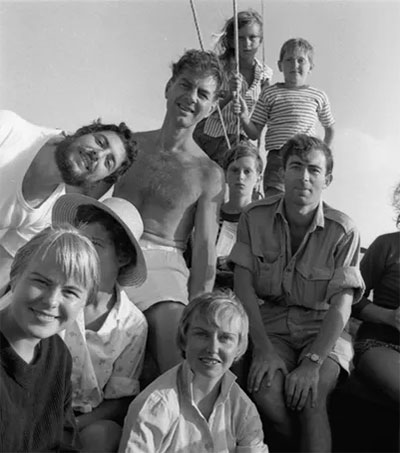 The research for Tanya Dalziell and Paul Genoni’s book Half the Perfect World: Writers, Dreamers and Drifters on Hydra, 1955-1964 has uncovered and drawn on many new first-hand accounts of Hydra’s artists and writers, including the writings and photographs of little-known New Zealand-born novelist, journalist, editor and publisher, Redmond Frankton “Bim” Wallis (pictured far right).

“With his wife Robyn, Wallis turned up on Hydra in mid-April 1960, only days before [songwriter and poet Leonard] Cohen [pictured with beard far left] arrived. The Wallises eventually left Hydra for good in August 1964. In September 1960, Cohen would buy an island house where he lived for much of the next decade and to which he returned occasionally throughout his life,” Dalziell and Genoni write in an essay for The Conversation.

“Fortunately for us,” the authors write, “Wallis had a camera with him and kept a diary of his time on the island. He later worked intermittently at turning his diarised observations into fiction.

“Even more fortunately, the National Library of New Zealand’s Turnbull Library later proactively solicited from Wallis numerous personal documents, including unpublished diaries, photos, correspondence and manuscripts. These included his only adult novel, Point of Origin (1961), written on Hydra, and unpublished titles such as The Submissive Body; Bees on a String; Juan Carlos and the Bad-assed Belgian; and The Unyielding Memory.

“Whatever the shortcomings that saw The Unyielding Memory left unfinished, it immediately commanded our attention. The manuscript was Wallis’s attempt to represent his Hydra experience as thinly veiled autobiographical fiction, and it provides many insights into life on the island in the early 1960s. These include an intriguing first-hand account of Cohen on the brink of the international renown that would make him one of the most significant literary and musical figures of the coming decades.”