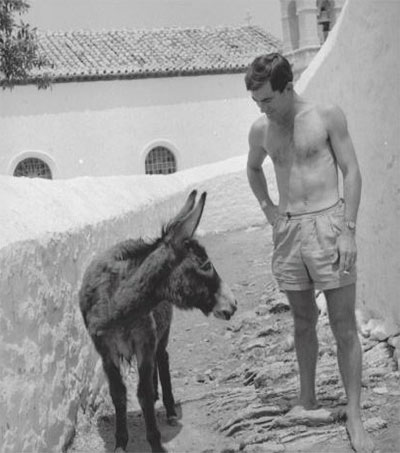 On Hydra with Writer Redmond Wallis

New Zealander Redmond Wallis plays a role in the new book, Half the Perfect World, which tells the story of the post-war international artist community that formed on the Greek island of Hydra, and also included the likes of Leonard Cohen and his partner Marianne Ihlen, and the Australian literary couple, Charmian Clift and George Johnston, who fostered the colony.

Drawing on previously unseen letters, manuscripts and diaries, and illustrated by the eyewitness photographs of LIFE magazine photojournalist James Burke, Half the Perfect World, is written by Australians Paul Genoni and Tanya Dalziell.

In a Sydney Morning Herald review of the book, Robert Clarke, a senior lecturer in English at the University of Tasmania, writes:

“Wallis’ diaries, correspondence, unpublished manuscripts, and photographs provide a repository of stories, insights, and gossip. Wallis and his wife Robyn arrived on Hydra in 1960. Encouraged and aided by Johnston, and despite his painful awareness of his own limitations, Wallis tried his hand at fiction.

“One outcome was an unpublished novel, The Unyielding Memory, a thinly disguised account of Wallis’ time on Hydra. Each chapter of Half the Perfect World ends with an extract from Wallis’ manuscript that casts an idiosyncratic light on various facets of life on Hydra.

“The records of Burke and Wallis play a key role. Yet, by drawing on a rich archive of writing and photography from a plethora of firsthand source, Genoni and Dalziell have crafted a superb book that examines the dynamics of a group of singular individuals in a particular time and place.”