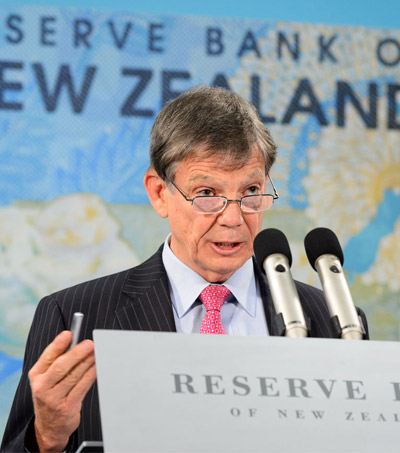 The Reserve Bank of New Zealand, which led industrialised nations in first starting to raise rates after the financial crisis, has won the Central Bank of the Year award. The kiwi is now approaching parity with the $A.

The award from the London-based Central Banking Journal recognises the “innovative work undertaken by the Bank to enhance its contribution to the New Zealand economy,” RBNZ chairman Rod Carr said in a statement.

“The Bank has worked towards playing its part in steering the economy on a steady path, through recovery from the (February 2011) Christchurch earthquakes, strong but now moderating terms of trade, and despite house price pressures, a weak international environment, and a high New Zealand dollar,” Dr Carr said.

“At the same time, it has implemented macroprudential policy to moderate financial stability pressures from the housing market,” he said.

In four moves last year, the New Zealand central bank raised its official cash rate to 3.5 per cent as Governor Graeme Wheeler aims to keep the rise in consumer prices in check with an expanding economy.