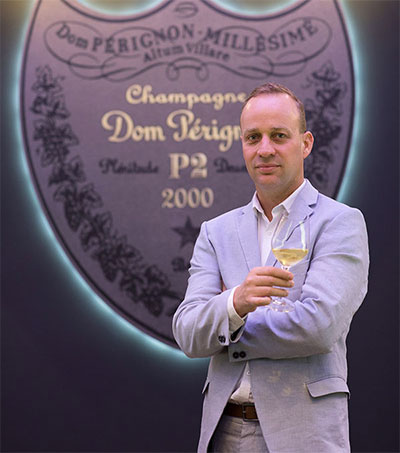 “It’s a dirty job, but someone’s got to visit three of France’s most prestigious champagne maisons in just one day,” Kylie McLaughlin writes for a story featured online at The Australian Financial Review. McLaughlin travels to the Krug family estate in Reims, the cellars of Moët & Chandon and the headquarters of Dom Pérignon, where oenologist, New Zealander Nick Lane, explains the “lengthy creation process” of the Vintage 2008.

“At Dom Pérignon’s headquarters – a former monastery – we’re ushered into the library and seated for tastings at a long oak table in the beautifully restored, light-filled room, which overlooks the immaculate gardens outside,” McLaughlin describes.

“Tastefully spartan – indeed, almost spiritual – the room reflects the lives of the Benedictine monks who lived here in the 17th century. Back then, the 20 stone buildings, courtyards and gardens that comprise the estate would have been places of peaceful reflection.

“In wanders Nick Lane, one of three winemakers here. If you think that name doesn’t sound very French, you’re right: Lane is a New Zealander who previously worked for Cloudy Bay, also owned by luxury brand LVMH, as is Dom Pérignon.

“While I’m having an out-of-body experience enjoying the first pouring of the Vintage 2008, Lane explains the lengthy creation process. Four or five wines are selected from the 60 or 70 made each year and given a blind tasting. ‘Whether it’s a sense of harmony or elation, we stop at the glass that gives us the most emotion,’ he says.

“A vintage is created only if deemed worthy. It’s then cellared for about seven years. A small percentage is held back to mature and create a second and third plenitude (P2 and P3), which are released after 18 and 25-30 years respectively.

“Just like wine, ageing champagne is key to its flavour (and its desirability – if you’re lucky, you might pick up a bottle of P2 in Australia for about $600).

“‘The young wines are stand-offish and the yeast releases a wealth of aromas over time; they start small, precise and refined, then the flavours intensify,’ Lane says, as he dutifully spits the liquid gold into the bucket. Savouring such a precious drop, I’ll be doing no such thing.

“‘Minerality is absolutely key,’ he continues. ‘Our vintage reminds you of the seaside. There’s a saltiness on the palate. As the wine ages it becomes more terrestrial and smoky, with earth-bound aromas.’”

Lane is originally from Auckland.