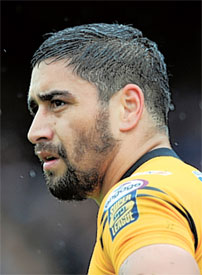 Dannevirke-born Rangi Chase, 25, has been named Super League’s Man of Steel as the competition’s best player, ahead of inclusion in England’s Four Nations train-on squad. The Castleford star has opted to qualify for England under the residency rule and has been drafted straight into the squad for this autumn’s tournament. Chase, who first came to Britain in 2008, says he now considers it to be his home. “I have resurrected my life in England and feel more at ease here than anywhere else in the world,” he said. England coach Steve McNamara says he has no qualms about drafting in Chase, who has been one of this season’s outstanding players. “It’s excellent news that Rangi wants to play for England and commit his long-term future to our international programme,” McNamara said.