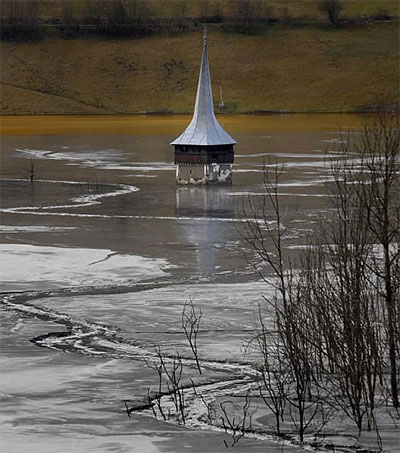 Auckland-born freelance photographer Amos Chapple’s “eerie images capture all that remains of [the] once-green and hilly Romanian village” of Geamana, a town evacuated in 1977 to make way for the vast Rosia Poieni copper mine, and buried slowly in waste sludge.

While 300 families fled, 20 villagers stayed and moved to slightly higher ground, where they remain today.

In 1977 communist dictator Nicolae Ceausescu announced the plans, offering locals approximately £1500 per home, leaving around 300 families to disperse throughout Romania.

Chapple travelled to the mostly-submerged ghost town to document its demise, and was surprised by what the few remaining locals told him.

“They were upset that they had lost their graves, but their approach to the loss of their village was, ‘Yeah it’s horrible, but without that mine there wouldn’t be any jobs here,’” he tells MailOnline Travel. “It was really impressive that they saw the situation as complex, rather than black and white, despite everything they’d been put through.”