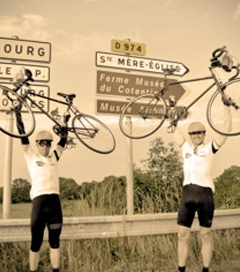 New Zealander Phil Keoghan has paid homage to the first New Zealander to complete the Tour de France team in an effort to raise funds for the United States National Multiple Sclerosis Society. The Emmy Award winning host of the reality TV show The Amazing Race and fellow antipodean, Ben Cornell, followed the exact path and schedule as the first English speaking team to ride in the Tour de France in 1928. The pair rode a gruelling 150 miles a day, in 22 stages over a 29 day period.To be as authentic to the original ride as possible, the pair rode 13kg vintage bicycles with no gears.

The duo were accompanied on their journey by Keoghan’s father, a follower in a car and a camera man, whose footage will be turned into a feature length documentary to be released next year.

The journey is a follow-up to ‘The Ride’, a 2009 bicycle ride the team took across the United States, which raise over US$1 million for MS.