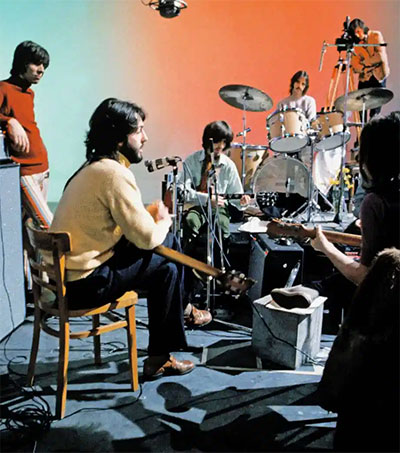 “In a brilliant move, the Beatles [have] hired a man who knows how to create a climactic finale: Lord of the Rings maestro Peter Jackson, [setting] him to work on the 56 hours of 50-year-old ‘Let It Be’ tapes,” Jem Aswad writes for Variety. Aswad reviews Jackson’s upcoming documentary film The Beatles: Get Back that covers the making of the band’s 1970 album Let It Be.

“Judging by the five-minute preview he dropped [in December] – ‘not a trailer or a sequence from the [forthcoming] film, it’s more like a montage of moments’ that ‘give you a sense of the spirit of the film that we’re making,’ [Jackson] says at the beginning – the results are astonishing. It’s been a long time since we’ve been totally, jaw-droppingly surprised by any ‘new’ Beatles anything, but judging by the preview released, Get Back is the final frontier,” Aswad writes.

“It’s like finding a box of old photographs, or hearing a story that shows how much your aunt and uncle really did love each other. Or, more accurately, it’s an alternate ending to a movie – a Casablanca where Bogey gets on the plane.”

Tags: Peter Jackson  The Beatles: Get Back  Variety Magazine