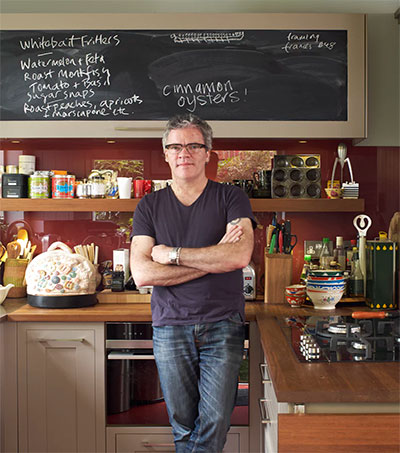 New Zealand chef Peter Gordon tells the Guardian’s Anna Wilkins about the characteristics of his home kitchen for the newspaper’s regular column, A Cook’s Kitchen.

“I used to come to Broadway Market on Saturdays and think: I’d love to live in Hackney,” Gordon explains. “I moved here six years ago – to possibly the only street in the East End that wasn’t bombed, which happens to look like Coronation Street. I have great neighbours – people who have lived here forever. When I moved in, I ripped out the hugely overgrown garden, and spent 10 weeks doing up the house. The kitchen came three years later. I kept the floor red – I’d fallen in love with the lino of the old kitchen – and, although I’d always steered clear of stainless steel in the home – too much like work – Round House Design suggested it, and it’s been good.

“I’ve had this tea cosy on my right for over 15 years now, and it’s just the cutest thing. It was made by [fellow New Zealander] Rosemary McLeod, quite a political writer who has a habit of making tea cosies from old blankets and things. She always names them too – friends bought me this one, called Hilda M Dunn, as a thank-you present. I drink a lot of tea and you need a tea cosy.

“I’ve been getting these old Uzbek bowls on the counter to my left from the Grand Bazaar in Istanbul for years. I was involved in restaurants there for a long time. The bowls are getting harder to come by because the factories who used to produce them have all become modernised. I love pottery – if I had my way I’d have a whole wall of ceramics here. Lots of chefs do – in our restaurants we’re all going simple, but at home I like clutter. I think it’s just a break from what you do for your profession.”

Gordon is a food writer and executive chef and co-owner of the Providores and Tapa Room in London.