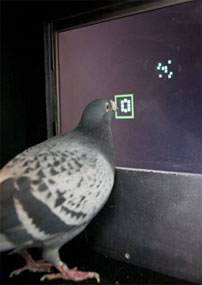 Dr Damian Scarf, a postdoctoral fellow at the University of Otago, and two colleagues have discovered that pigeons can learn abstract rules about numbers, an ability that until now had been demonstrated only in primates. The pigeons pecked images on a screen in order, lower numbers to higher. Given groups of six and nine, they could pick, or peck, the images in the right order. This is one more bit of evidence of how smart birds really are, and it is intriguing because the pigeons’ performance was so similar to the monkeys’. “I was surprised,” Scarf said. No testing has been done with numbers greater than nine, so whether a pigeon can count large numbers of bread crumbs or popcorn kernels is a question still open to investigation.