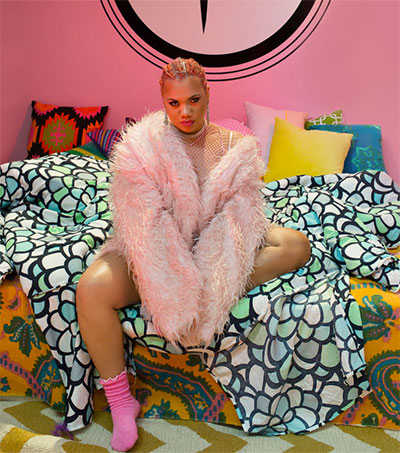 Parris Goebel Gets the Planet on the Dance Floor

World-famous choreographer Parris Goebel, 24, is making her own music now, because she can. ELLE magazine goes behind-the-scenes on the Auckland set of her new music video, “Friday.”

You’ve definitely seen her in Justin Bieber’s “Sorry” video (which she directed, choreographed, and starred in, and which just received three MTV VMA nominations). She also choreographed that J. Lo AMAs performance you’ve re-watched at least 14 times, and has worked with Rihanna, Janet Jackson, and Nicki Minaj.

It’s an impressive resume, but it’s only the beginning. “This is just a warm-up. I’m just getting started, to be honest,” she tells the magazine.

The shoot is a part of her latest project – her own album – the videos for which she shot all around the world, recruiting local dancers to join her and her crew. For this song, however, she chose to film in her hometown, in part in her own studio, The Palace, where she has coached her star dance group, The Royal Family, to three consecutive world titles at the World Hip Hop Dance Championships from 2011 to 2013.

Every aspect of the video, from the choreography to the direction to the brightly-coloured accessories, was carefully selected and/or approved by Goebel herself.

“I have such a strong vision in my head of what I can see,” Goebel says. “Everything has a purpose, has an intention.” Fashion and colour, then, are inextricably linked to music and dance for Goebel.

When ELLE asks where she sees herself when she’s 30, she rattles off her hopes to make a clothing line, open her own entertainment and performance academy, create a hip hop-infused Broadway show, and produce, direct, and edit her own movie.

“Being creative was the only thing I was good at, so I didn’t have a choice, I could not give up. What were my other options? You know, a lot of people are like, ‘Oh my gosh, you’re from New Zealand, how did you get here?’ And I’m like, I just never gave up, obviously.”

Photo by Jacobs and Hue.