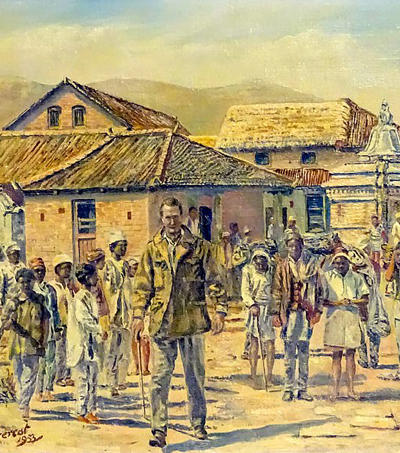 “Never-before-seen paintings from Sir Edmund Hillary’s record-breaking expedition to Mount Everest have been found in a house clearance 66 years later.” Darren Boyle reports in an article for The Daily Mail. The paintings “have now been consigned for sale with Dickins Auctioneers if Buckingham, Buckinghamshire.”

“The four oil paintings were the work of a member of the British expedition party that set out to become the first to climb the world’s highest mountain.”

“The previously-unknown pictures show Hillary setting out for Everest base camp in March 1953 surrounded by Sherpa guides and local children,” writes Boyle.

“Although numerous photographs of Hillary and Norgay climbing Everest exist, it is not known that the party had a resident artist.”

“All we know of the artist is that his name was A.C Thornton who appears to have been a member of the expedition who did a bit of painting on the side,” said auctioneer John Dickins.

“They were painted on the ascent and descent of the mountain. The works do appear to be on the naive side and there seems to be no record of them anywhere.”

“They are rare for that period because by 1953 photography was well advanced. But Hunt was a military man and came from a time when they had official war artists, maybe that was his thinking here.”

The sale will take place in April.