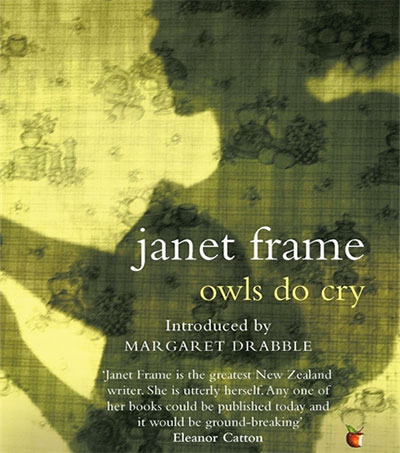 Janet Frame’s 1957 debut novel Owls Do Cry has now been reissued with a nuanced and appreciative introduction by Margaret Drabble, who calls the novel “an exhilarating and dazzling prelude to [Frame’s] long and successful career,” writes Irish author Neil Hegarty for the Irish Times.

Owls Do Cry is a devastating reflection on the character of conventional society and the dangers that await those who reject its narrowness – and as such, is profoundly chilling. It is also a vivid social document, capturing the language and texture of the postwar period. It is a heartbreaking evocation of childhood and a child’s vision of the world; and not least, it is a work of considerable lyrical beauty. All of this, and more, is achieved by means of a continually shifting narrative mode: a revolving kaleidoscope forcing the reader to square up to questions of judgment and morality, sanity and insanity, death and life.

The publication of Owls Do Cry created a sensation. Some critics recognised in the book a scathing satire upon what were taken to be the narrow orthodoxies and materialism of contemporary New Zealand – and by extension, western – society; others hailed a modernist classic and recognised the advent of a new voice that owed little or nothing to other influences. Still others, however, wondered how much of the book was based on Frame’s own life: the Sunday Times grumbled at the book’s “poetic, rather dotty stream of consciousness”; and speculated on the author’s own state of mind.

Owls Do Cry was the first of the 11 novels Frame published during her lifetime: and the book helped to establish her reputation for power and originality.

There is a natural urge to assess Frame’ writing against the challenges of her life – especially as she herself in her writing repeatedly revisited and reworked these difficulties. The key to this point, however, lies in her lifetime of work. Drabble notes that Owls Do Cry, for all that it deals with trauma, “has a buoyancy of creativity and brightness. Some of its characters encounter defeat, but it is a song of survival.”

This same point might be made of Janet Frame herself: that she emerged victorious – and the evidence of this victory lies not in parsing excessively the stuff of her life, but in reading what she created in the course of it.

New Zealand’s Jane Campion has “underlined her status as one of the leading film-makers of her generation, taking home the best director trophy at the Venice Film Festival”, AFP reports. The Power…