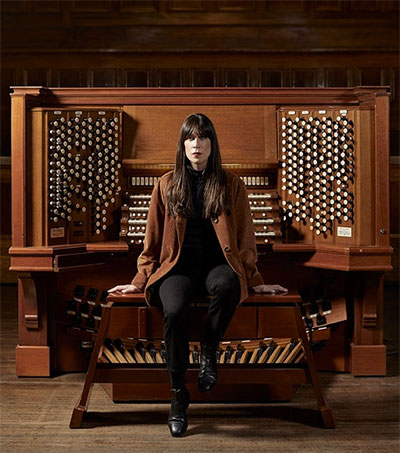 At the Organ with Sarah Mary Chadwick

Sarah Mary Chadwick’s artistic output has been an ideal combination of quality and quantity, according to Robert Ham who Skype interviews the New Zealand musician for monthly music and entertainment digital magazine, Paste. Chadwick cranks out paintings and drawings at an impressive clip, hurrying the ideas onto the canvas before she can overthink them. She didn’t have such luxuries when she received a commission to write a suite of songs using only the 147-year-old pipe organ installed in Melbourne Town Hall, Ham writes.

With only three months to complete the project, she didn’t allow herself to play around with the nearly infinite sonic combinations at her hands and feet with this massive instrument. She had to focus in and make every note and moment count.

What that yielded was The Queen Who Stole The Sky, a stunning collection, recorded live, that finds Chadwick leaning into the natural creak of her voice and the dynamic wails she can reach as a counterbalance to the stentorian sounds of the pipe organ. The tone of these 11 songs was naturally affected by the tone of the instrument as she dug deep into feelings of desperation she wrestled with following the deaths of her father and a close ex-boyfriend and, as she puts it in the press notes for this album, “the fact that I’m always waiting for life and it never arrives – it only ever leaves.”

Paste asks Chadwick about how she had to adjust her vocal performance to reckon with the sound of the organ.

“With a guitar or a real piano, it responds to you,” she explains. “If you want it to be loud, you play it loudly. If you want it to be quiet, you play it quietly. If you want to play something quiet on an organ, you have to build a sound that was quiet so that your singing wasn’t drowned out by it. So the dynamic is built into the arrangement. Working around that, I made sure that my singing was audible and that I gave myself as much space as I could, so that I wasn’t dwarfed by it. To be honest, I’m generally pretty confident about new projects but then when I first saw it, I didn’t know exactly how this was going to turn out. I was a little bit intimidated. But it worked out for me, I think.

“The idea for the title track is from a children’s book that’s about a really demanding queen who had this really diminutive husband that she kept wanting more and more and more from. She had everything but what she really wanted was a dress made out of the sky. So, the king obliges her and rips down the sky and she gets this beautiful dress. But the outcome of story is that the world is ruined because there’s no sky for anyone to exist under. You could do a really interesting psychoanalytic reading of a story like that, about people getting ruined by desire. Like hysterical desire, which is never really realised.”

Chadwick, 36, was once a member of Wellington band Batrider.

She grew up in Taumaranui and now lives in Melbourne.