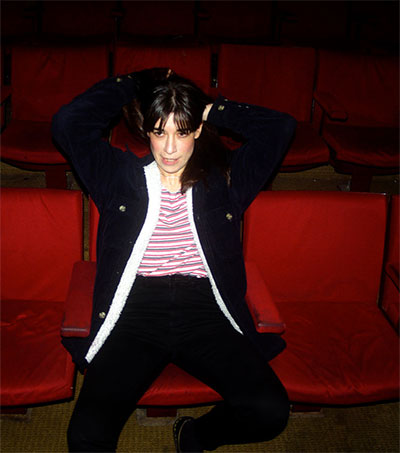 “The mix of New Zealand-born singer [Sarah Mary Chadwick’s] agony and the hope of the organ she’s playing makes for a compelling listen,” according to Kory Grow in a review of Chadwick’s new song, ‘Confetti’ off her latest LP, The Queen Who Stole the Sky, an original 11-song composition written specifically for Melbourne Town Hall’s grand organ.

“When Chadwick sings, her voice sounds brittle, as though it’s crumbling as it leaves her throat,” Grow writes. “The only thing that props her up on ‘Confetti’ is the rounded, warm, comforting tones of the ancient grand organ she’s playing. That combo – Chadwick’s breakdown coupled with an instrument of hope – makes you want to keep listening to hear if it all falls apart or if she’ll make it through to the end.

“In different ways, the mix of light and shade recalls the personal nature of PJ Harvey’s music, the naked id of Daniel Johnston and the loneliness of Television Personalities. But it’s wholly unique to Chadwick – who was a member of the Melbourne-based downer-rock group Batrider before reinventing herself as an avant-folk solo artist – and her temperament.”

The Guardian reviews The Queen Who Stole the Sky giving it five stars, and calling it a “terrifyingly loud masterwork”.

“Chadwick, who usually performs with a guitar or hunched over a keyboard, and whose brackish voice tends to draw attention away from her arrangements, rarely seems diminutive in performance or on record; beneath the weight of the organ, she is an ant,” Shaad D’Souza writes for the UK newspaper. “The scale turns out to be fitting. Because The Queen Who Stole The Sky uses the terrifying might of the ancient instrument as a counterpoint for a series of stunning meditations on sheer normalcy, and the beige-tinted terror of everyday life.

“The Queen Who Stole The Sky is Chadwick’s most plangent, resonant work. While all her past records have been result of the strength of her intent and talent, there’s something shocking about the austere composition of this album that feels as if it’s coagulated Chadwick’s vision into a ferocious, arresting whole. The Queen Who Stole The Sky is rarely an easy listen – it is terrifyingly loud and heartbreakingly vulnerable, often grotesque in its sadness – but the sense of pure catharsis it elicits is unparalleled.”