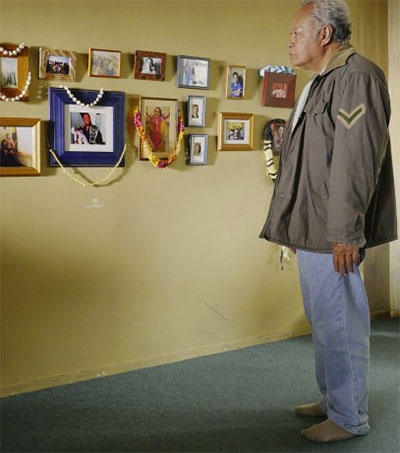 One Thousand Ropes Premieres in Berlin

“Childbirth becomes a powerful vessel for renewal in this deeply felt drama about a Samoan former fighter atoning for the violence that divided his family and exiled him to solitude,” the Hollywood Reporter’s David Rooney writes in a review of One Thousand Ropes, which has screened in the Panorama section at the 2017 Berlin International Film Festival.

“There’s a scene early in Samoan New Zealander Tusi Tamasese’s One Thousand Ropes in which the central character, a male midwife, assists a young woman in natural childbirth while a cartoon blares from a television in the room, depicting the story of a Polynesian demigod who snares the sun to slow its path, granting longer hours of daylight,” Rooney writes. “That seemingly casual connection between life and mythology, between flesh-and-blood reality and its parallel spiritual dimensions, informs this meditative drama about the redemption of a man whose healing hands have also inflicted scars on his family.”

“While Tamasese pushes the enigmatic solemnity to a fault, he sustains the subdued intensity with impressive control, building to a hopeful conclusion that resonates in the contained performance of Uelese Petaia as Maea, a former fighter once known as ‘The Lion.’ Maea has renounced violence for a simple, peaceful life that remains plagued by the heavy burdens of his past.”

“From Leon Narbey’s composed camerawork with its minimal, graceful movement, to the pensive scoring of Tim Prebble, incorporating sounds of nature, this slow-moving film keeps its conflicts veiled, making the audience work to access the characters’ inner lives. It combines melancholy domestic drama with spiritual and supernatural elements, and while the latter could have been more robustly developed, a quiet power accumulates nonetheless. Maea’s hands become a moving symbol of the old man’s efforts to redefine his place in the world and seek forgiveness through his daughter (Frankie Adams).”

Tamasese made Samoa’s first ever feature film, The Orator (O Le Tulafale), which was screened in 2011 and submitted to the 84th Academy Awards.