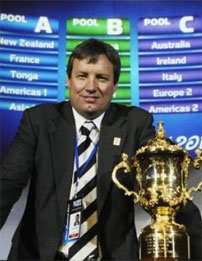 One Opportunity to Get It Right

“’Martin Snedden the former international cricketer now charged with delivering the Rugby World Cup to New Zealand, is clock-watching; has been for the best part of three years,’ the Telegraph’s Paul Ackford writes. ‘We’ve used it a lot to generate urgency across the board,’ Snedden says of the countdown clock in his Auckland office. ‘We’ve celebrated 1, days to go, two years to go, 5 days to go, and we’ve got 1 days coming up shortly. We’ve had this event planned month by month from 2½ years out and we’re constantly measuring against that.’ But here’s the thing. Snedden is not concerned one jot about stadiums being ready. Nor he is worried that the final … Nor is he anxious about opportunistic hoteliers making the most of limited accommodation by ratcheting up rates. Snedden is not even bothered about the fact that the tournament is set to make a loss. No, what niggles away at Snedden, what exercises him more than any of the other issues when it comes to the 211 Rugby World Cup is what will happen if the All Blacks go belly up around the quarter-final stage, as they did in 27. And how best to involve the people of Christchurch.”