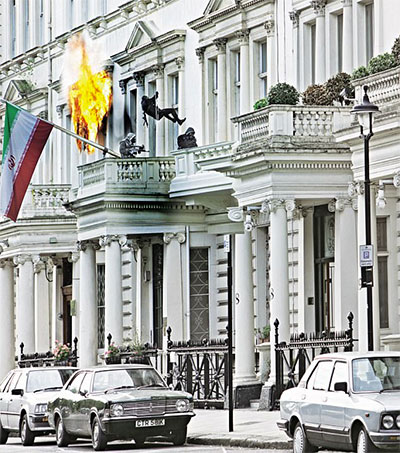 The heroism of SAS soldier, Scotland-born John McAleese is being brought to the small screen in a joint £20 million UK-New Zealand co-production called 6 Days, which screens on Netflix on 3 November. The film is directed by New Zealander Toa Fraser.

McAleese was one of the British Army’s most famous and decorated special forces soldiers.

He later became a TV star in BBC reality show SAS: Are You Tough Enough?

Now his central role in the storming of the Iranian embassy after the terrorist siege in 1980 is being immortalised in the big-budget drama.

The show is based on the book Go! Go! Go! by Rusty Firmin, one of the SAS troopers who took part in the raid. McAleese is played by New Zealand-born actor Colin Garlick.

McAleese, known as “John Mac” to his SAS team, was watched by millions of TV viewers as he blasted his way through the embassy’s reinforced balcony window with explosives at the start of the operation.

He later said: “My only job at that point was to get on the balcony, place the charge, get back, blow it, turn around and go back in through the window.”

Referring to the hostage-takers, he added: “They were on our home soil and it was like they were the invaders.”

McAleese died from a heart attack in Greece, aged 62.

Garlick is a graduate of the Unitec Performing and Screen Arts Bachelor majoring in acting.