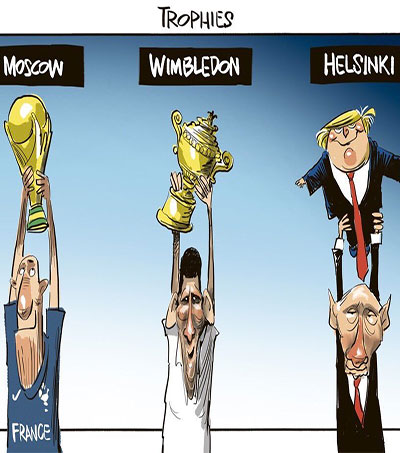 Rod Emmerson, who is the editorial cartoonist for The New Zealand Herald, has been recognised for his popular artwork after receiving a new award he says “beats a knighthood”.

While in California attending a conference for the Association of American Editorial Cartoonists (AAEC), Emmerson was gifted something quite special, the Ring of Skulls, by legendary Canadian cartoonist Terry Mosher.

To be the first to receive one beats a knighthood in Emmerson’s book “because it comes from the heart and soul of a living legend of a cartoonist, and backed by a legion of great cartoonists on the other side of the world”.

Kevin Kallaugher, Maryland-based cartoonist for the London-based Economist, was also marked to receive a ring, meaning there would be three recipients in total.

Early this year, one of Emmerson’s cartoons went viral with hundreds of thousands of views, even appearing on French television screens.

The cartoon was a cheeky play on three major global events – the Football World Cup, Wimbledon and the meeting between Donald Trump and Vladimir Putin.

“For me it was a bit of an aligning of the planets because you had three really big events within 24-48 hours of each other – that being the World Cup Final, the men’s final at Wimbledon, and then the forthcoming summit with Putin and Trump,” Emmerson said.