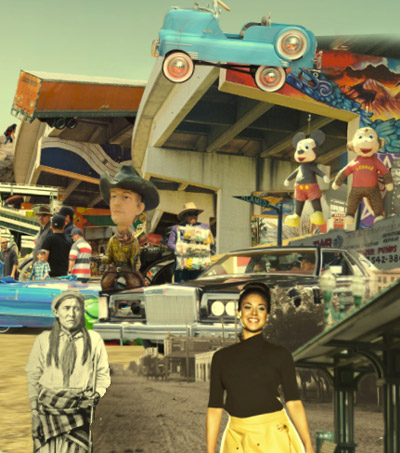 For nearly 20 years, New Zealand-based experiential design company the Gibson Group has designed and built one-of-a-kind, interactive, multimedia visitor experiences for museums, galleries, archives, libraries, tourist centers, and businesses around the world. Gibson Group’s signature TouchCity® platform is an award-winning, multi-user media experience that takes public and personal archives and photos and transforms them into cascading, 3-D cityscapes. The platform—developed and piloted in partnership with the Copenhagen Museum and with Danish designers Spild af Tid—launched in Copenhagen in 2010 and has proved a phenomenal success, attracting over 1.3 million visitors to date.

On Valentine’s Day, the Gibson Group debuted its first TouchCity wall in the U.S. when a large-scale interactive experience called DIGIE (Digital Information Gateway) was unveiled at the Museum of History El Paso. Work on the project began three years ago, with technical installation under way since January 2014. The scale of the project is enormous—the 36-foot-long, five-foot-tall El Paso exhibition represents the biggest touchframe in the U.S. and the largest permanent exhibition of its kind in the world.

“The wall is the perfect enhancement to a revitalized Downtown and a magnificent example of what we can accomplish by believing in ourselves and working together,” El Paso Chamber of Commerce President and CEO Richard E. Dayoub told The El Paso Times. “It’s like a giant iPhone!” one amazed museum-goer told local ABC affiliate KVIA.

The wall brings together the museum and city residents’ own collections to create a 3-D model of El Paso’s historic and cultural landscape. Experiencing TouchCity is like walking through Copenhagen or El Paso with your fingertips, with viewers able to explore the city geographically, historically, or thematically. Above all, the walls are collaborative experiences—with City residents and exhibition-goers invited to contribute images at home, at school, or via their mobile devices. Both the El Paso and Copenhagen exhibitions are designed to operate 365 days a year without being manned, with all operating systems monitored remotely and content managed from a curator’s desktop.

“Touch screens are different from a common tablet technology, the screen is a single piece of tactile material and measures 36 feet wide and 5 high and is the first of its kind in the United States,” said Allan Smith, Gibson Group Director Visitor Experience Design, who was on-site in Texas for the installation. “It is the first permanent installation of this size in the world, and the city of El Paso is the first to have it.”