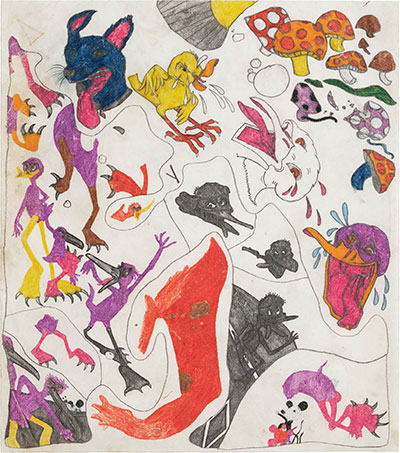 “Entitled ‘Parallel Phenomena’ it also includes the work of Carroll Dunham, Gladys Nilsson, and Peter Saul. Though not emphasised at the exhibition, its underlying point is to bring King, who in the press release is called ‘self-taught’, together with artists who are ‘credentialed and academically trained’. The idea, it would seem, is to break down the standards imposed by ‘an ill-informed hierarchy’,” Schwartz writes in the review.

“The majority of the works on view are from her teenage years through her twenties and present, especially in the earlier pieces, images of human and animal threat and commotion.

“By the early 1990s, though, King’s desire to draw left her. It only came back in 2008 when she began to make abstract, weaving-like images, which she continues to do today.”