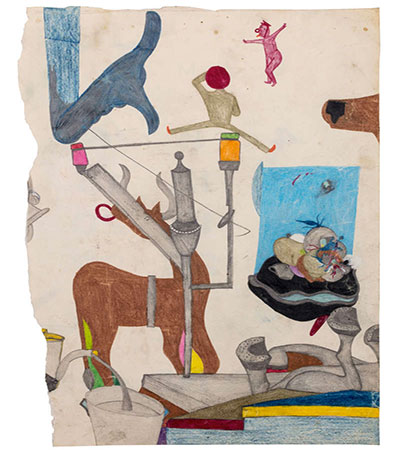 New Zealand artist Susan Te Kahurangi King stopped speaking aged four, and has since communicated only through her acutely detailed drawings. As her first UK exhibition opens at Marlborough Contemporary, London, her sister and curator reveal an extraordinary life – and talent.

King is 66 and she has been drawing since she was a young child. For decades the marks that streamed out of her pen have been her prime means of expression, because at around the age of four, King stopped speaking. By the age of nine she had stripped her verbal communication down to an occasional word. At 10, her grandparents were discussing a funeral they had been to, and Susan broke her silence to say: “Dead. Dead. Dead.” It is the last thing anyone remembers her saying.

Sometimes as a child, she hummed or sang as she drew. But when the family introduced her to people, where she grew up in Te Aroha, in rural New Zealand, they’d say, “This is Susan, she doesn’t talk, but she does great art.”

King’s family has always appreciated her work. But it is only in the last few years that she has broken into the commercial world with her first exhibitions at the Outsider art fairs in Paris and New York, and at the ICA Miami. Thousands of miles separate where Susan lives with her sister Wendy, her main carer, in Hamilton, New Zealand, and New York or Dallas, where the freelance curator Chris Byrne divides his time. But one day Byrne was chatting with his friend, the artist and illustrator Gary Panter. Panter mentioned King – he’d come across her work on Facebook – and after the two men had said goodbye, Byrne looked her up. It was like viewing a Philip Guston, he says. “There’s an immediacy there. I knew it so quickly. As a draughtsman she is off the charts, as an image-maker too.”

Byrne has curated all of King’s shows. Some of the 32 works exhibited at the Marlborough Contemporary gallery, with their tightly segmented shapes, faces and body parts, tessellate like vibrant, jagged jigsaws.

Susan Te Kahurangi King is on until 1 July.