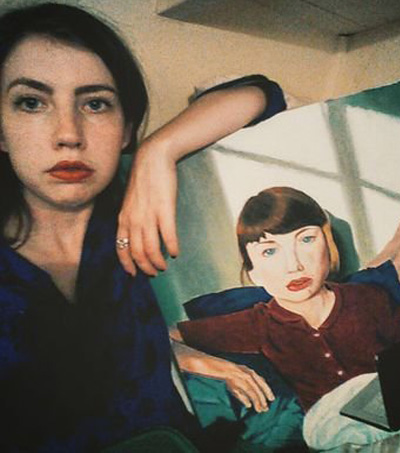 Hera Lindsay Bird, who “has become a cult favourite for her explicit, cutting and often funny writing” was “catapulted from respected but anonymous graduate writer to semi-cult status” after publishing her first book of poetry in July, reports Eleanor Ainge Roy for The Guardian.

The self-titled book– a provocative, raunchy bestseller – “was published in July by Victoria University Press and a reprint has already been ordered”. Her poems Keats Is Dead So Fuck Me From Behind, Monica (about Monica from friends) and Hate have exploded on to the New Zealand literary scene, as reported in the article.

“Good poetry for me is hard to describe, but I like poetry that feels alive, or has an energy to it, even after you’ve read it aloud 50 times, even if it sounds a little wrong somehow,” Bird wrote in an email interview.

“Many people want poetry to be a streamlined vehicle for meaning, but I’m more interested in poetry that allows room for ugliness and error – I prefer that on an aesthetic level.”

“I’m at my worst when I’m serious, in writing and in life. It drains all the blood out of my work. I tried for years to outrun my own jokes, to write measured and lyric work, to make my poems as pristine and elegant as possible, but they were just dead on the page,” she said.

“The tone and icepick casualness of Bird’s prose can make it seem offhand but underlying the playfulness is a focused dedication to her craft and a writing process she describes as ‘intensely rigorous’,” writes Roy for The Guardian.

Keats Is Dead So Fuck Me From Behind, Monica received 50,000 page views when it was published on the Spinoff website in July. Bot to Bird page views aren’t a good “indicator of whether or not work is any good.”

Bird, who still works full time at Unity Books in Wellington, is a graduate of Victoria University’s creative writing program.