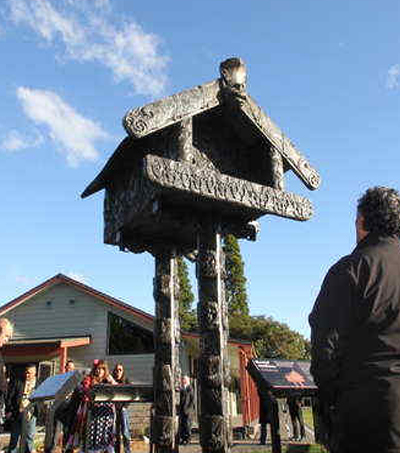 “A significant cultural gift from Aotearoa New Zealand to the United Nations is a step closer with the unveiling of a bronze whatarangi (storehouse) at Te Puia New Zealand Māori Arts and Crafts Institute (NZMACI) in Rotorua,” as reported in an article in The Financial Express.

“At more than 3.5 metres high and weighing nearly four tonnes, the gift takes the form of a whatarangi, a raised storehouse where the most precious taonga (treasures) of the tribe would traditionally be stored. The bronze whatarangi symbolises safe-keeping, representing the storage and maintenance of tangible and intangible heritage,” according to the article.

“The kaupapa initiative, called Māori Tū, is led by the Iwi Chairs Forum and has been developed as a demonstration of support from Aotearoa New Zealand for the United Nations Declaration for the Rights of Indigenous Peoples.”

One of the key objectives, the gifting of the taonga (treasure) “hopes to achieve, is to deepen understanding and to grow a greater social and political consciousness around the significance of the Declaration to both iwi Māori, and to New Zealand,” according to Sir Tumu te Heuheu, chairman, Iwi Leaders Group which is responsible for the direction of Māori Tū.

“Furthermore, we hope that the whatarangi will help to nurture the blossoming of a set of values which will help to inform the development of a unique relationship between indigenous peoples and the United Nations into the future. The unveiling of the whatarangi is another important step in the process, not just for technical reasons, but also to acknowledge those who have been involved with this kaupapa and to celebrate its completion,” he said.