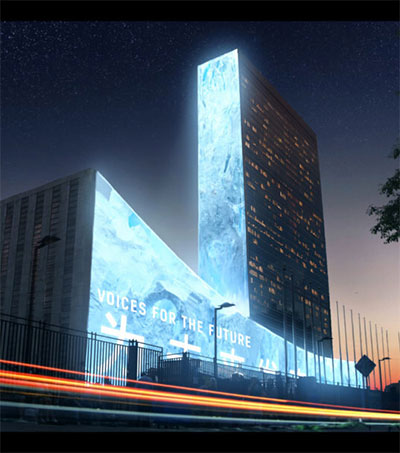 Auckland University of Technology artist in residence Joseph Michael lit the United Nations headquarters in New York last week with an immersive installation that featured images of an iceberg and the messages of six young advocates including Swede Greta Thunberg and New Zealander Jason Guan, addressing hopes and fears around the climate crisis and the urgent actions that must be taken. The Guardian featured images of ‘Voices For the Future’ in a picture gallery on their website.

According to the newspaper, Michael produced the Voices For the Future installation in collaboration with environmental charity Project Pressure, which lit up the UN general assembly and secretariat buildings in New York ahead of the UN’s climate action summit and global school strikes.

The Guardian reports that Voices For the Future opened with an iteration of Michael’s artwork, Antarctica: While You Were Sleeping. It featured powerful visuals of an iceberg slowly crashing down the sides of the 155-m tall UN building, intended to bring the remoteness of the Antarctic to urban New York.

Wellingtonian Rhian Sheehan composed the soundscape, which together with Michael’s work reflected how icebergs crack, shift and breathe, revealing their fragility.

Messages from the younger generation transformed the UN into a glowing beacon, highlighting the climate crisis and underlining the need to preserve our world for future generations and the critical decisions to be made at the summit.

Guan’s message read: “When I think about how many people will die in the next 100 years due to climate change, it’s staggering. People that are doing fine now might have their livelihoods taken away in the next 10 to 20 years. My generation is inheriting this planet – I want to see policies based on science.”

Michael’s work has been featured on 60 Minutes and National Geographic.