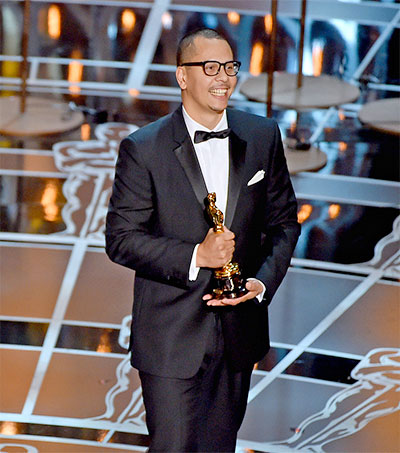 Christchurch-raised James Lucas has won an Oscar in the category Best Live Action Short Film, for his “moving” and “well-deserved” The Phone Call, a star-studded film he co-wrote with friend, Briton Mat Kirkby.

“Keep tissues handy, because this beautifully made short packs a three-hour epic’s worth of emotion into just 20 minutes.”

Lucas admits to the Guardian that the Oscars hoopla “wasn’t something we were contemplating while we were sitting in a disused office in [London borough] Enfield”. Like nearly all short-film stories, theirs is one of rejection and indifference from the big cheeses and grant-givers, enthusiasm from friends and helpers, and a four-year haul from the initial nervous jottings (by Lucas) to the Dolby theatre.

In truth, neither Lucas nor Kirkby are film industry ingenues: both work for RSA, the production company established by Ridley and the late Tony Scott. Kirkby is a music video and commercials director, with promos for Adele and Basement Jaxx, and ads for KFC and Sony PlayStation under his belt, and Lucas is his booker, assigned by RSA to sell Kirkby to clients.

Lucas told the Press he hoped his achievement would make New Zealanders proud.

“I love Christchurch, I love it with all my heart and I love New Zealand.”

Lucas grew up in St Martins, Christchurch and attended Christchurch Boys High School. He has lived in London for the past 15 years.