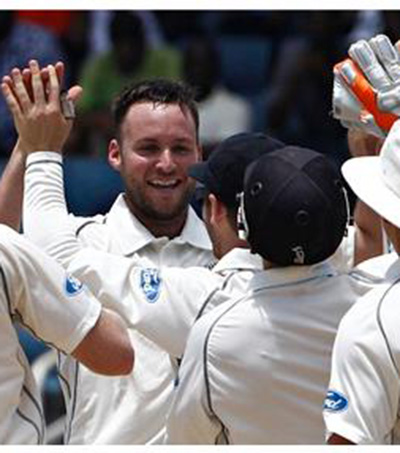 New Zealand Win Their Second Ever Test in the West Indies

New Zealand has beaten the West Indies by 186 runs for only the second time in the Caribbean, thanks to some incredible bowling figures by Mark Craig.

The hosts were bowled out for 216 after Black Caps captain Brendon McCullum requested an additional 30 minutes when they reduced the West Indies to 115 for 7, with only four overs remaining.

The hosts were dismissed in the final over of the day, chasing an improbable 403 runs for victory.

Mark Craig, the off spinner, broke the record for the best figures by a New Zealander on debut.  He got 8-188, and 4-97 in the second innings.

The West Indies were not giving up without a fight, with the 10th-wicket partnership of Shane Shillingford and Sulieman Benn belting 82 runs from 56 balls.

The partnership ended when Benn was caught by the wicketkeeper BJ Watling from the part-time spinner Kane Williamson for 25, with only two balls remaining in the day’s play.

Shillingford was left 53 not out, having scored the second-fastest Test half century, from 25 balls. He hit five sixes and three fours in his innings.

McCullum had declared New Zealand’s second innings on 156 for eight, pushing the tourists to a lead of over 400 runs.

Craig ended up scoring the final runs for New Zealand, having belted a six on the first ball he ever faced in Test cricket.

The victory is New Zealand’s 12th in 43 tests against the West Indies.

The second test of the three-match series begins in Trinidad on Monday.