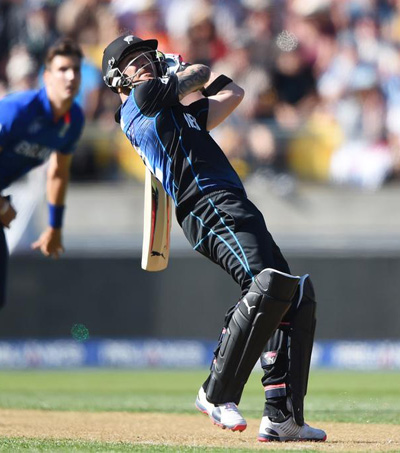 “At the hands of an urgent New Zealand superbly led by Brendon McCullum” Engand’s defeat at the Cricket World Cup in Wellington, “went beyond the realms of simple humiliation and entered that of fantasy, a dream, a nightmare,” the Guardian’s Mike Selvey declares. England were bowled out for just 123 batting first.

“This did not really happen, did it? Except it did. At one stage in the 26th over, England were 104 for three: eight overs later they had been bowled out for 123, with the brilliant pace bowler Tim Southee taking seven for 33 with fast, full away swing, the third best bowling figures in World Cup history and including a spell of five for 10 in 19 balls.

“England would still have fancied their chances, if not of winning, at least of making New Zealand work for their runs. Instead, McCullum, unencumbered by any notion of restraint, launched such a brutal attack on the England pace bowlers that by the time he missed a straight full toss from Chris Woakes, he had made 77 from 25 balls, with eight fours and seven sixes and had added 105 for the first wicket in one ball more than seven overs.

“There has to be enormous credit due to McCullum. He is, by some measure, the outstanding leader in world cricket, someone who is not just up with the game but ahead of it. He attacks at all times, and backs his bowlers, who in turn respond.”