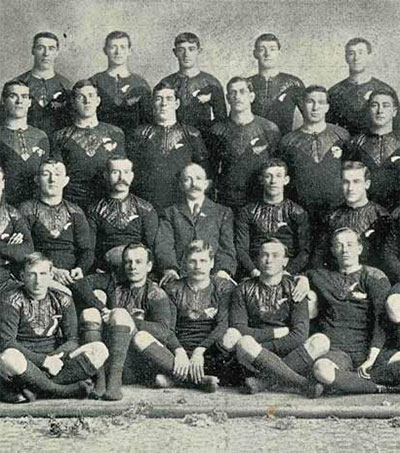 A country of just under four and half million is home to arguably the most dominant team in sport. The Guardian looks at how the All Blacks remain at the pinnacle more than 100 years after the “Originals” established their supremacy.

In 112 years of playing rugby, New Zealand’s winning percentage is 78. In 20 years since the sport turned professional, that figure has risen to 84. As world champions, the All Blacks have become even better.

In 2013 an English journalist wandered into New Zealand’s team room and saw the phrase “we are the most dominant team in the history of the world” written on a whiteboard. It’s not far wrong. In the four years since the last World Cup, the All Blacks’ winning percentage has risen to 93. Count the defeats on one hand and you will have two digits spare. In the same period there have twice been two new moons in the space of a single month. The All Blacks really do lose once in a blue moon.

To understand New Zealand’s game today you have to understand how it began. In particular, the 1905 tour to Europe and the USA or the “Originals”, as they are now known. They played 35 matches and won 34, scored 976 points and conceded 59.

Jock Phillips is perhaps New Zealand’s most respected historian. “Rugby really took off as a national game at the turn of the century,” Phillips says, “and the crucial thing there was the 1905 All Black team. The context of that was that New Zealand had always – has always – had a certain insecurity about its place in the world. We’ve always got a certain anxiety that we are falling off the edge, that we don’t really count.” The tour, he says, “gave New Zealanders a sense that they had a role to play in the empire”.

The 2015 Rugby World Cup begins on 18 September. The All Blacks play their first game against Argentina on 20 September at Wembley Stadium in London.