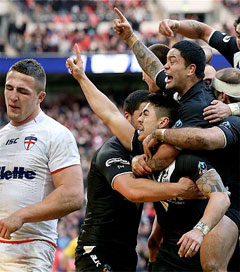 The Rugby League World Cup 2013 semi-final, which saw New Zealand defeat England 20-18, portrayed the game “at its finest”, according to the Telegraph’s Paul Hayward, who was witness to England’s “devastating defeat” in front of a crowd of 70,000 at Wembley.

“Thirteen beaten figures stood under their posts and watched New Zealand celebrate a try scored 21 seconds from the end of one of the great rugby league internationals,” Hayward writes.

“England were less than a minute from next weekend’s rugby league World Cup final when a high tackle by George Burgess blew their composure and their previously Herculean defence lost its shape. New Zealand’s Shaun Johnson registered England’s confusion under pressure, jinked round Kevin Sinfield, who had dashed off his line to engage him, and touched down to leave the defending champions needing a simple conversion to win a pulsating match.

“Sports that are constantly touting for new business have one eye on the game and the other on the general public, hoping to attract converts. This was a game to bring them streaming through the turnstiles.

“[New Zealand coach Stephen Kearney] was asked whether a good team had merely found a way to win or England had blown it. “Well, we put ourselves in that position with 30 seconds left. You can be the judge of that,” Kearney said. In other words: both.”

New Zealand takes on Australia in the final at Old Trafford on 30 November.