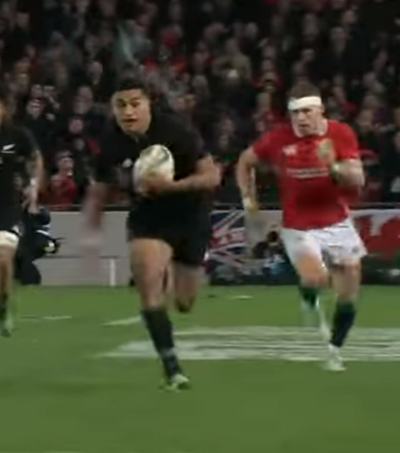 New Zealand Run Away with First Test Against Lions

“The British & Irish Lions must now win both remaining Tests to deny New Zealand a series victory after a sobering loss to the All Blacks in Auckland. The Lions defended heroically at times but two sharp second-half tries from Rieko Ioane (pictured) ultimately took the home team well clear of Warren Gatland’s side,” the Guardian’s rugby union correspondent Robert Kitson reported from Eden Park.

“The contest [which the All Blacks won 30-15] was far more competitive than the final margin might suggest but New Zealand were never once behind on the scoreboard. The All Black lock Brodie Retallick was particularly outstanding and Codie Taylor also scored a smartly taken try as the world champions demonstrated again how tough they are to beat on home soil. The Lions did manage a splendid 36th-minute try by the flanker Sean O’Brien but could not quite nail a couple of half chances which might conceivably have influenced the outcome.

“If the Lions were under any illusions as to how hard it is to upset their opponents in their own backyard, here was yet another reminder. The All Blacks went into the game having won 46 Tests in a row in New Zealand since their defeat to South Africa in Hamilton in 2009 and have still not lost in Auckland in the professional era.”

The teams meet next in Wellington on 1 July.