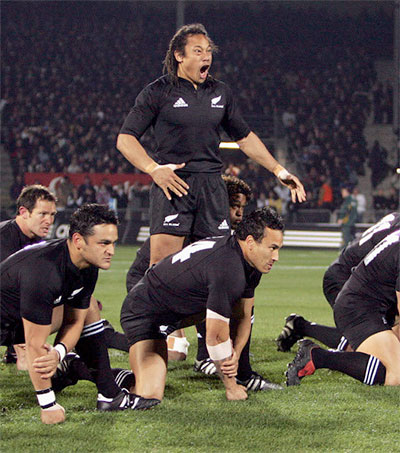 An exclusive Telegraph report reveals that in 2004 many All Blacks felt the haka was no longer appropriate, and how management and senior players ensured it was maintained.

The choreography itself was not a problem; all the moves had been learnt by heart since the team were children. The issue was that the haka had become divorced of its significance and meaning in the 21st century. Ka Mate Ka Mate, a 19th century song about a Maori warrior’s debt to a hairy man for hiding in his sweet potato pit, had lost its connection to a team of largely Polynesian and European descent.

“We talked about how it was a burden sometimes for the boys during the haka because the camera was in your face and you were doing it for the wrong reasons,” Aaron Mauger, the former Leicester centre, said at the time. “It was becoming a sideshow.”

Over the course of the 2004 tour, the management and the senior leaders, led by captain Tana Umaga, held a series of discussions on how the haka could be maintained and kept relevant. Consultations were held with the Ngati Toa tribe to whom Ka Mate Ka Mate belongs and it was decided to commission Derek Lardelli, an expert in Maori customs, to compose a new haka tailored specifically for the All Blacks. And so Kapa o Pango was born.

“It’s a smorgasbord of different influences. My understanding of the haka is that it is like a poem so he’s taken different parts of different hakas and put together something together that reflects what we were trying to portray with our words,” team manager Darren Shand said.

Kapa o Pango made its debut before the Tri-Nations match against South Africa in August 2005. Not only did the All Blacks now have a haka that was specifically theirs but the process of studying their past served to reengage the players with the symbolism of Ka Mate Ka Mate.