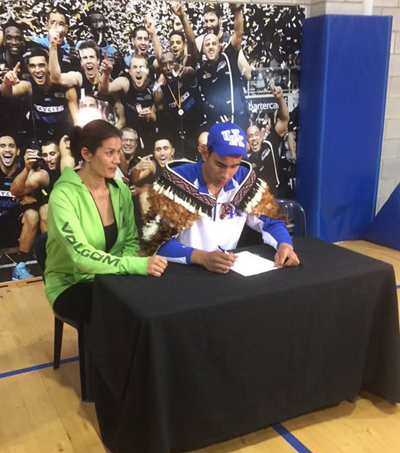 New Zealand basketball player Tai Wynyard has announced on Sunday that he has signed with the Wildcats, an American college basketball team that represents the University of Kentucky.

“They have really high hopes for him, say he’s an amazing kid and has this great family. I don’t think he’s going to be a one-and-done guy, don’t think he’s your typical five-star Calipari recruit, but a guy like him makes a lot of sense for Kentucky,” said Jonathan Givony, DraftExpress.com analyst.

“He’s going to compete and score in the paint. He’s going to Kentucky to get better. He needs to improve physically and in his ability to compete against athletes. That’s what he’s going to find every single day in practice at Kentucky.”

Wynyard will enrol in December and be eligible to play in the second half of this season, although it is possible Wynyard will redshirt and begin his career next fall, according to The Courier Journal.