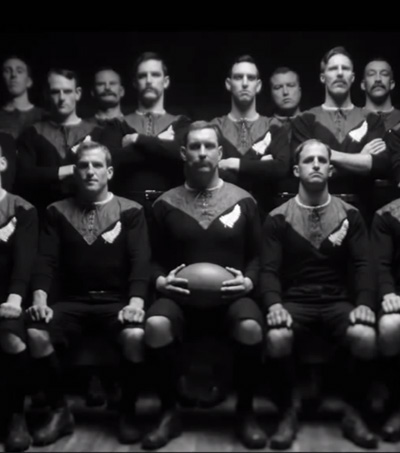 “New Zealand’s Steinlager stylishly recreates the country’s first-ever rugby team to tour the UK back in 1905, in this spot gearing up for the Rugby World Cup next month”, writes Alexandra Jardine for Creativity Online.

With their black and white ad Steinlager goes for a more nostalgic approach rather than the loud and aggressive style of other rugby ads.

The ad, which uses the tagline “We Believe”, shows the 1905 team who were “farmers…blacksmiths… nobodies I suppose,” in the dressing room before taking on England.

“Its recreation of the team, from costume and hairstyle, to the luggage labels on their cases, is stirringly authentic and is bound to appeal to the patriotism of any Kiwi (who will know that they beat England 15-0)”, according to Creativity Online.

The ad has been created by DDB New Zealand and has been directed by Adam Stevens of Robbers Dog.

Stevens already directed another rugby-themed Steinlager campaign, which won a Gold Lion for Creative Effectiveness at Cannes in 2013.