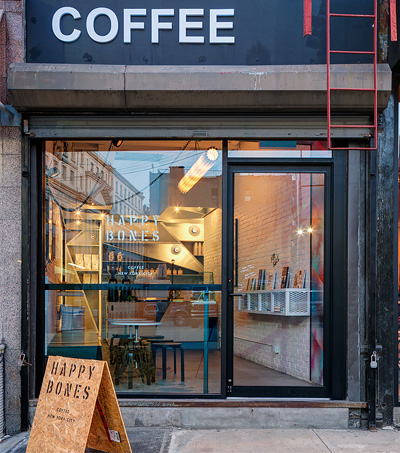 Craig and Kirsten Nevill-Manning bring NZ java culture to New York with the opening of Happy Bones coffee shop in Soho (394 Broome Street). This charming spot for a perfect cuppa joe was recently profiled in William & Park, a NYC-based media outlet that focuses on a “new breed of creative entrepreneurs and artists who are redefining what it means to make a living from the work that feeds their souls.” Writer Karen Hou describes the kiwi café as “true to its name” and suggests a trip “will give your mood an instant facelift.”

Co-founded by the Nevill-Mannings, fellow New Zealander Luke Harwood, the co-founder of rebellious fashion label, Stolen Girlfriends Club, and contemporary artist and Florida native Jason Woodwide, Happy Bones is a small (432-square-foot) but distinct addition to NYC’s burgeoning coffee scene. In the article, Woodside suggests his interest in the dark brew comes from coffee being “the drive behind anything artistic to me; it keeps me going.” Asked to describe Happy Bones in five words, Woodside suggests: creative, progressive, friendly, beautiful, and clean, and explains how New Zealand coffee culture is just a little bit different from other places. “There’s a lot of open white space, let the coffee do the talking,” Woodside says. “And that’s sort of the gallery side, the white space, let the products do the talking, let the painting do the talking.”

Meanwhile over at Contemporist, Happy Bones is recorded as a design project by Ghislaine Viñas Interior Design and UM Project. It notes that the boutique coffee shop that was originally an alleyway between two existing buildings in the SoHo neighborhood of New York, so maximizing the usable space for customers was of the utmost importance. “The owners envisioned a space that was a strong departure from the typical coffee shop look and feel, that features not only great coffee, but art and publications from around the world.”

And New York property and design site Curbed chimes in with its inclusion of Happy Bones in its feature 15 of the Coolest New Shop Interiors From Around the World.

Happy Bones is just the latest professional and creative endeavor from the Nevill-Mannings. Google NYC Engineering Director Craig—who founded Google’s first remote engineering center in midtown Manhattan in 2003, now with 2,000 staffers in Chelsea —was recently honored by the Carnegie Foundation as one of a distinguished group of immigrants, joining 37 other notables who “have helped advance and enlighten U.S. society, culture, and economy.”

Kirsten, former Facebook Senior Director of People Operations, is currently Vice President, People Operations and Facilities of Teachers Pay Teachers, the world’s first and largest open marketplace for educators to buy, sell, and share their original resources. That kind of tech and philanthropic work requires serious rocket fuel: Happy Bones is the place for a caffeine fix. Craig is a computer science graduate from Canterbury, Waikato and Rutgers universities, Kirsten a psychology graduate from Canterbury.